On a sunny morning during Chol Hamo'ed we met in Ashkelon's National Park on 20.4.11 for a second walking tour through the rich history of our city.

We heard from our guide & kehilla member, Haim Avishur, about the strategic importance of Ashkelon as a Philistine seaport, we walked along the beach scattered with archaeological remains & then climbed the ancient ramparts to view modern day urban development. 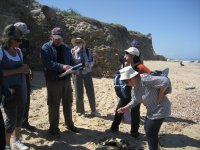 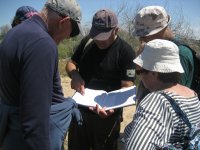 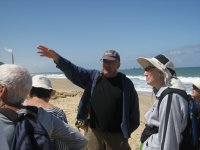 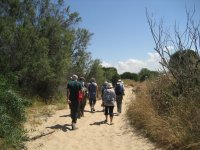 It was a thoroughly enjoyable morning during which many of us discovered & learned much about Ashkelon from Haim's animated & inspiring explanations. We learned that the name "Ashkelon" may derive from the ancient measure of weight known as a Shekel, and is illustrative of the city’s great commercial past. Today, the Shekel remains the currency of the State of Israel. We also know the name Ashkelon colloquially, from the scallion, as this onion was first grown and exported from Philistine "Ascalon".

Many thanks & well done to the dedicated group who walked for 3 hours without complaining!