On 12/4/10, Holocaust & Martyrs Remembrance Day (Yom HaShoah), about 80 people attended a moving ceremony at Kehillat Netzach Israel in memory of the 6million Jews who perished at the hands of the Nazis.

It is vital that we "remember & not forget" but at the same time, we must try to see the rays of light through the darkness, the kindness & heroism of those who risked their own lives to save others. For this reason, our ceremony this year focused on the Righteous Among the Nations, a small minority of non-Jews who showed extraordinary courage to uphold human values & rescued Jews during the Holocaust.

During the ceremony, kehila members who are themselves Holocaust Survivors lit Memorial Candles accompanied by teenagers who had recently visited Poland on school trips. We saw a short film & heard the amazing stories of some of the Righteous Among the Nations. 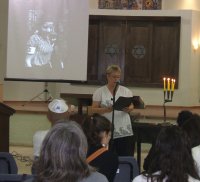 One such story was related to us in a testimony by Tova Veiss, Director of our Afternoon Day Care Program, whose own mother, Elizabeth Leah Veiss, was commemorated by Yad Vashem for helping Jews in Hungary during second World War.

The ceremony also included readings, prayers & songs … it was all in all a very emotional evening.