“From India even to Ethiopia” – From Ashkelon to Mexico City

The “Children’s Megilla” is a project initiated by Rabbi Gustavo Suraszki and the Netzach Israel congregation in Ashkelon. This is the fourth year that it has been carried out. This year the partners in the project were the Bet El congregation in Mexico City and the Nof Yam B School in Ashkelon and the megilla was donated in loving memory of Tamara Leah Sandler z”l.

The project has several elements. On one hand, there is the educational element that exposes the children to the story of Queen Esther through the experience of study and art. A second element, equally important from an educational point of view, is creating and strengthening ties between Israel and the Diaspora.

In the first stage, in both places the children studied the megilla and were asked to draw the central motifs of the story. In the second stage, the drawings were printed on parchment by the artist Sigalit Orgad, a member of the Netzach Israel congregation, who donated her talents to the design of the megilla.

The last stage was writing the megilla on the parchment with the pictures. This was done by Rabbi Gustavo Suraszki, the Rabbi of the Netzach Israel congregation and himself a Scribe. Both the Rabbi and the artist visited the school and included the children in the process and experience of the writing.

The Children’s Megilla was completed in a celebratory ceremony on 15.2.10, the second day of Adar 5770. 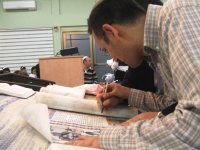 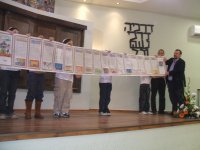 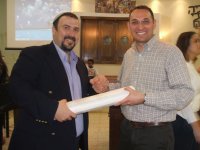 Mali Amber, the headmistress of Nof Yam B School, added, “I’m proud of my pupils. By their deeds they showed that real giving is the willingness to give of oneself.”

Shlomo Cohen, the Deputy Mayor, honored the ceremony by his presence and said, “From a historical point of view, the dispersal of the Jewish people has been its weak point, and here we see a beautiful project that expresses the close tie between Jews in different parts of the world.”

in Mexico City this Purim.