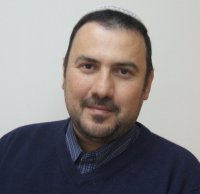 Born in 1970 and brought up in Argentina, Rabbi Gustavo Surazski was ordained at the "Seminario Rabinico Latinoamericano" in Buenos Aires in 1988, where he taught halacha & rabbinical literature until 2002.

Rabbi Gustavo (as he known by his congregants) holds a BA in Scriptures and Jewish Philosophy from Haifa University and a MA in Jewish Studies from JTS in Jerusalem.

He is also a scribe.

Rabbi Gustavo made aliyah to Ra'anana in 2002 where he became rabbi of the local Spanish-speaking Masorti congregation and since 2004 he has been the rabbi at Kehilat Netzach Israel in Ashkelon.